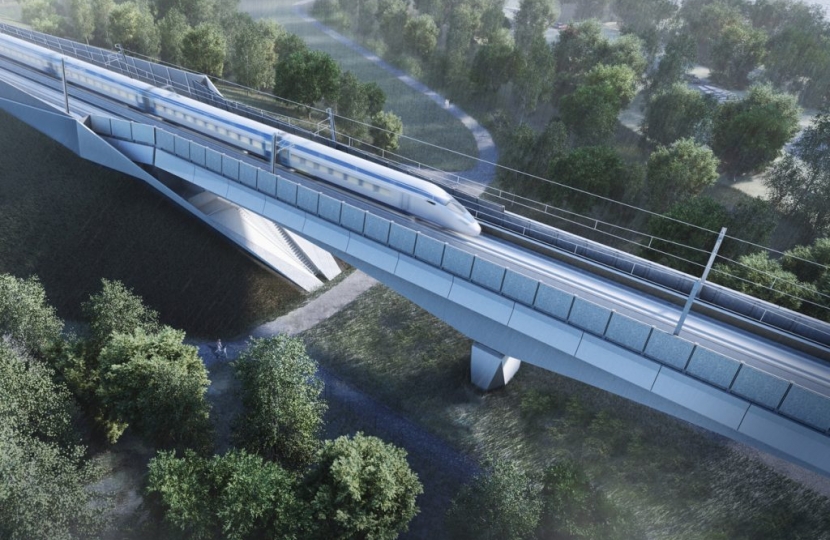 A cross-party letter has been sent to the Prime Minister by leaders in the North and Midlands “calling for the Government to publish an Integrated Rail Plan which recognises freight’s vital role in local, regional and national economies by committing to the delivery of the Eastern Leg of HS2”.

The joint letter to Prime Minister Boris Johnson comes from Cllr Ben Bradley MP, Conservative Leader of Nottinghamshire County Council and MP for Mansfield, and Cllr James Lewis, Labour Leader of Leeds City Council.  Supported by MPs across the North East, Yorkshire and the East Midlands, it asks the Government to “give HS2 East the green light to move to the delivery and implementation stage as soon as possible”.

The letter explains that “rail freight is vital to the eastern regions” and describes HS2 as “the best opportunity to create a substantial increase in capacity for rail freight in the UK”.  The two leaders stress the importance that freight, transport and logistics play in the national economy and recent challenges, explaining how:

As passenger numbers begin to recover from the COVID-19 pandemic, providing increased capacity and capability for rail freight will be just as important.  The letter explains the environmental and traffic congestion impacts due to lack of UK freight capacity:

Although the benefits of this will be felt across the country, there would be an extremely positive impact across the North and the Midlands where our industries have such a significant reliance on freight, transport and logistics.

Highlighting the impact on North East England, the letter describes how the importance of rail freight is vital to the UK’s eastern regions and cannot be over-emphasised because capacity on the East Coast Mainline is currently constrained to just six passenger trains per hour north of Northallerton due to the lack of upgrades to reroute freight.

The Eastern Leg of HS2 is pivotal by creating additional capacity on our existing routes to better connect supply chains, support the economic recovery and our efforts to ‘build back better’, while enabling net zero carbon targets to be achieved.

“The Industrial Revolution was led from Leeds and the North of England by exporting our goods to Britain and the world.  Rail freight adds £870 million a year to the economy but today track congestion restricts freight and passenger services, and is pushing millions of unnecessary HGV journeys on to our busy roads.  That is why we ask the Prime Minister again to give the green light to the eastern leg of HS2 that will cut carbon and increase freight by rail across the whole UK.”

“The passenger benefits to signing off the eastern leg are well known but, for Nottinghamshire and the whole region, our industry also relies on freight, logistics and transport. Taking lorries off the road and removing bottlenecks that cost business many millions whilst significantly increasing freight capacity will deliver positive gains for the region and further boost local assets from the East Midlands Gateway to the new Inland Freeport.  HS2 East is more than a railway line; it is fundamental to our vision for levelling up communities throughout our country.  That is why we are asking Government to publish an Integrated Rail Plan that recognises freight’s vital role so in the Midlands and across the North we can get on with the job.”

“Increasing rail freight capacity via HS2’s eastern leg is essential for North East England and the UK economy.  It would reduce the pinch points that restrict passenger trains up the East Coast Mainline up to Newcastle and also substantially reduce carbon emissions and industry costs by moving millions of journeys from HGV on to the railways.  I support the call for Boris Johnson to sign off HS2 East and let us increase freight routes to support the whole of Britain and the North.”

“County Durham is a manufacturing powerhouse essential for North East England’s status as the UK’s net exporter.  That is why freight matters across the North, the UK and to the world.  Bottlenecks on the East Coast Mainline don’t just restrict passenger journeys north of Northallerton they cost industry vital trade and clog up our roads, and this will only get worse as we need to cut carbon to remain competitive. The Government is committed to levelling up our country so let’s get on with HS2’s eastern leg and let our communities thrive.”

“Darlington and the whole of the North East were transformed by the birth of the railways 200 years ago. As the United Kingdom looks to recover post-Covid and deliver on the levelling up agenda we must once again look to the railways as an engine of growth for our region and press ahead with investing in our rail network.”

“Teesside led the world by making and exporting steel and chemicals, but today our overcrowded rail network means both passengers and industry are held back.  Committing now to HS2’s eastern leg would open up vital new capacity along the East Coast Mainline that is bottlenecked north of Northallerton.  North East England has a vital role to play in Britain’s economy and global trade so we call on the Prime Minister to recognise why freight matters and sign off HS2 East so we can get on with the job.”

50 new schools selected, with the majority located in the Midlands and North of England
The School Rebuilding Programme is due to deliver 500 rebuilding projects over the next decade
Government also confirms increase in core per pupil funding levels for 2022/23