Secretary of State for Transport reveals that Sedgefield MP Paul Howell lobbies him daily pushing for better infrastructure for his region. 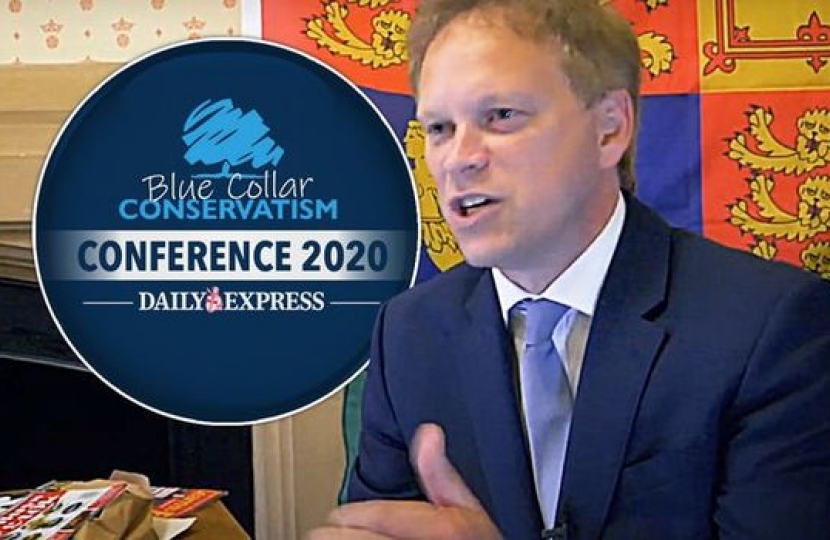 A senior Government Minister has revealed how a local MP contacts him every day pushing for better infrastructure in the region – as he promised to deliver for people in the North East while speaking at a political conference.
Transport Secretary Grant Shapps speaking at the first Blue Collar Conservatism conference hosted by Tatton MP Esther McVey, said Sedgefield MP Paul Howell is relentless in campaigning for improvements and his passion was crucial in driving change.
Mr Shapps also urged people to support companies such as Ebac in Newton Aycliffe as part of the levelling up and support goods made in the UK as the economy recovers from the pandemic.
Mr Shapps said: “It is incredibly important as we recover from Covid, many of these big infrastructure projects in the north, many of them now in the blue wall seats, we need to make sure we are building stuff in Britain and buying stuff in Britain, there are brilliant companies like Ebac that make things like white goods that you cannot buy from any other British company in some cases and if we support those companies as we have supported our communities through the Covid and recovery we are going through that surely is a route through.
“We can be unashamed about backing our own industry and helping people to work their way out and that is a brilliant way to help build communities and improve people’s lives so I think there is a real spirit of that throughout the north.”
The BCC conference is a week-long event which travels the country speaking to local people and businesses hearing what they want and then taking the message back to the top of Government to be answered by ministers. Last night Sedgefield was featured covering the issues of transport and levelling up the country with a focus on made in the UK and heard from residents saying they felt forgotten and expressing the need to raise morale.
Mr Howell, who is part of BCC in Westminster said: “Taking discussions to the community like this is such a critical part of government. For too long areas like Sedgefield have not been listened to and when the Blue Collar team and Esther joined me to reach out the response was fantastic. At very short notice both residents and business leaders stood up and contributed to the debate. I am incredibly proud of them for this and I will do everything I can to ensure Government listens and delivers for them.”
Mr Shapps added: “Since I have been Secretary of State and looking after the Northern Powerhouse, I meet people who say they cannot move around the area and reopening things like Ferryhill station could make a big difference. With a Conservative MP and Conservative mayor, we really are starting to see a difference on the ground, it is exciting time and we intend to deliver for them.
“Some of these seats have been promised stuff for so long. Now we have people like Paul Howell I am hearing from him, I think it is every day, just pushing and pushing and pushing. We are going to make sure things change for people and after all these decades.”
Mr Shapps said the BCC conference will help with levelling up the country as MPs, such as Mr Howell were committed to ensuring local voices are heard and policy influenced.

To watch the event back visit www.bluecollarconservatism.co.uk.

Last week, the Health Secretary Matt Hancock, announced that both County Durham and Darlington would be placed into Tier 3 COVID-19 restrictions from midnight on Wednesday 2nd December.