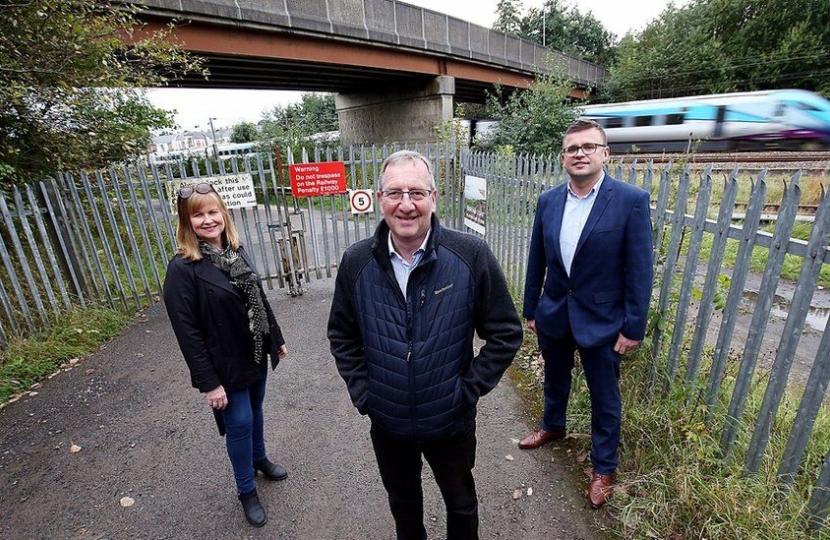 One of the first projects on my to do list when I entered office in 2019 was to effectively campaign for the restoration of a railway station at Ferryhill. I will be updating my Facebook on the progress of the campaign, or you can follow it yourself here: https://www.facebook.com/groups/ferryhill.

The area, which once boasted many stations, saw their lines dwindle throughout the 1930s, 40s and 50s, and be completely axed by the Beeching Closures in the 1960s.

Under the Beeching closures, it was recommended that Ferryhill itself be closed. But having a railway through Ferryhill always boasted much local support, and due to strong opposition, it was able to remain open until 1967. What was left of the station was demolished in the 1970s.

The construction of a new station at Ferryhill Station will fill a large gap in current rail service provision in County Durham.

Nearly 35% of Ferryhill’s population have no cars or vans in their household, much higher than County Durham’s average of 27% and England’s 26%. That would indicate that the area in and around Ferryhill are more heavily reliant on public transport.

However, at this current time, this public transport comprises mostly of infrequent and slow buses and no local trains. Indeed, after a new rail connection, our local survey found that ‘better bus services’ and ‘more buses’ were the most common response to being asked what could improve getting around in your local area. 77% of our local survey respondents put ‘better transport links’ as one of their top three options to improve their local area. Those who own a car are reliant on it; those without find leaving the local area and expanding their opportunities very difficult.

The campaign to reopen Ferryhill station has been ongoing for years, but there was never the appetite for the previous MP or for the previous Government to really pick it up and run with it. Residents felt unheard, and understandably disgruntled.

I began my efforts by researching which would be the most effective avenues to lobby the Government for the reinstation of the railway. Having recognised the need to invest in regional transport infrastructure, the Government put forward a ‘Restoring your Railway Fund’, for which MPs and local councils could bid for. The Fund aimed to allow local communities to reinstate axed services and restore closed stations. This sounded the perfect initiative to restore Ferryhill, so I eagerly put forward an initial bid outlining the need for a station in Ferryhill, and outlining why it would be an easy initiative for the Government to support: it was low cost, the track was already there, and it would connect easily to nearby hubs such as Newcastle, Middleborough, and York.

We got backing from Network Rail, Durham County Council, Northern trains, and Northern Powerhouse Partnership and the Tees Valley Mayor, all influential supporters. We also got a wave of support from local neighbourhoods and councillors, who put together press releases and petitions, and signed up to the Ferryhill campaign group on Facebook, all of which bolstered our bid.

We were delighted that our initial bid was successful. The Fund’s process then provided £50,000 for us to commission more research into the feasibility of the station, how much revenue it would generate, how many people it would help, how well it would feed into other stations. Durham County Council, who took on a bigger role at this point, employed a consultancy company called Mott McDonald to do the research and analysis, and to provide the report for the second stage of the bid.

The report generated details which, in my view, entirely support the proposals. It is a great supporting document.

This has just been submitted, and we wait with quiet confidence to hear about the result of our second round of efforts.

Fitting into my wider levelling up ambitions

Central Government has placed a strong emphasis on the role that infrastructure has to play in delivering economic growth in recent years. Estimates indicate that over £375bn of investment is needed to fully upgrade the UK’s key infrastructure to an adequate level.

Infrastructure investment is undoubtedly a key economic driver, helping both the national economy, and smaller county economies, attract and retain business and jobs. Nationally, it is recognised that our transport infrastructure needs to support UK business growth, not only in terms of supporting the movement of people and goods, but also in respect to providing more efficient forms of transport, and reducing journey times, which is exactly what this scheme can offer.

This investment has been acknowledged to be needed most critically away from London and the South East. The Government’s Industrial Strategy cites that the UK has a greater disparity in regional productivity that other European countries, which in turn causes a disparity regionally in people’s pay, work opportunities and life chances.

A less explicit Government policy has been to repay the votes of northern constituencies who placed their trust in a Conservative Government to invest in their local infrastructure, and to lessen the economic gap between the North and the South. It would therefore be favourable for transport bids, such as this Ferryhill/ Stillington bid, to be successful, as it delivers on the Government’s commitment to improve the micro economies and opportunities in the north of the country.